To say Michele’s  kneebuckling beauty and charm made English my second language would be a falsehood. To say her beauty and charm (along with the scent of Tabu) put my ability to complete a coherent sentence at risk would be closer to the truth.  We were 12 or 13 at the time of this all too brief flicker of romance.

Michele and I  danced with the Orange County Ballet Theatre (OCBT) just outside of Newburgh, New York. At the time this story took place I was dancing a lead role in a ballet called Elegy for the Joffrey Ballet. I would join OCBT for performances on a regular basis.  My first teacher and mentor, Regis Powers, was the co-founder and director of the company. Very often I’d dance the role of the Nutcracker Prince. Michele, as I recall, danced several roles in that ballet, one of which was an Arabian dance in which each of the girls wore a costume that exposed their bellies and lower backs. How I didn’t collapse into a puddle of helpless smittenfication when I watched her in that role was and is a mystery to me.

Never did the phrase head over heels in love find itself more accurately applied then when it was applied to my reaction to Michele. Being head over heels for someone (at any age now that I think about it) can toss many things related to good judgment right out the proverbial window. At the time, I lived in Nyack, roughly 50 miles away from where Michele lived in Newburgh. I couldn’t stand being apart, so, one night I climbed behind the wheel of my grandfathers Mercedes! (I’d never driven a car before, only go karts) and drove to her house in the dead of night just to, well, look at her house. The fact I got there and back safely is a miracle. A few years ago I had the chance to talk to Michele on the phone and told her about this middle-of-the-night drive. “Why didn’t you come in?” she asked (I could feel her smiling). I said it was something like 2:30 in the morning and I figured her family might want to know why on earth was I knocking on the front door at that ungodly hour and, by the way, Peter, whose Mercedes is that?

After a performance of the Nutcracker one night at, I believe, the Valley Central High School in Montgomery, New York, Michele and I walked down a dimly lit school hallway until we were alone. (It was then I learned exit lights are some of the most romantic lighting known to humankind.) There near the wall lockers, I summoned up my courage and kissed her. Our first kiss! When it was over and we began walking back down the hallway I swear I was floating! First, the romance of exit lights, then the greatest kiss that ever took place in the history of the world, and it was true, you could walk on air! At one point I stopped walking and asked, “Can I kiss you again, just to make sure that was real?” And we kissed again! It was real, and I was still floating.

Well, that was, I am sad to say, the beginning and end of our romance. But, then and now, it was a moment I will never forget and always be grateful for. Recently, a close friend of mine sent me a picture of Michele and me. When I saw the picture for the first time I swear there was a hint of Tabu in the air. I even looked down to see if I was floating again. I won’t tell you whether I was or not. (You’d never believe me.) 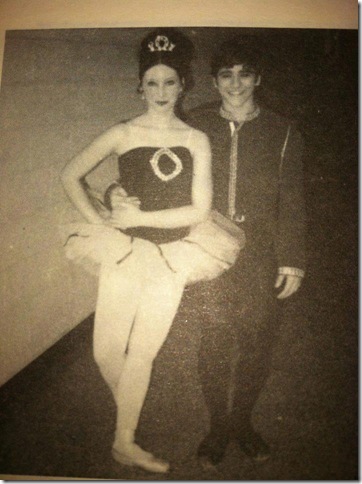