There were no words thought, only moments felt. My head nestled against hers resting on a blanket, the soft puffs of her breathing in my ear. She was sedated, my old German Shepherd McKenzie, who loved and guarded my life with her own every second of our many years together. And now, as the vet injected her with the drug that would end her peacefully, I held her close, tears streaming, no words, though I heard someone saying Thank you, thank you, thank you, and realized it was me whispering in McKenzie’s ear.

And then her last breath came and went. Silence. Moments later the gentle-voiced vet saying, “She is gone,” and still I held her close. The vet and vet tech hugging me, take all the time you need, they said, and quietly left the room. Now words tumbled out, professing love for this amazing animal, my friend, she was my friend. Then laughing through tears telling her I used to say dogs are people too until I realized I was insulting the dogs . I apologized to her still form and thanked her for all she’d done for me, not the least of which occurred a few weeks earlier when a bout with pain had me on the floor pouring sweat. Age and weakness did not stop McKenzie from getting to me and licking the sweat from my face and staying close, watching over me.

McKenzie was 14 when she died. They say that’s a good run for a German Shepherd and I suppose that’s true. Were it up to me she’d have lived forever and gone on to add love and safety to another’s life after I’m gone.

There are people whose passing would bother me less than McKenzie’s. This may surprise some, maybe even offend a few. Can’t help it. Dogs don’t lie, don’t betray, don’t care about skin color, politics, sexual orientation, economic status, whether you do or don’t live with a disability. They love you because you are you. You can’t say that about too many people. You can say that about every dog, save for those who’ve been abused by….wait for it….people. 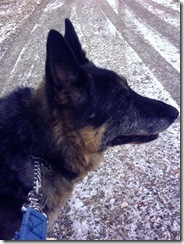