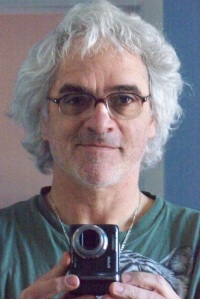 I am firm in the belief that a sense of humor – even a goofy one! – is a sibling of courage. I know no one who is functioning well in life after taking some of life’s more formidable beatings who does not have a sense of humor.

These past three years the goofball part of me has seen a lot of action. First, I was determined to give community life another go when I moved here. Ever since the shooting – I was held up and shot in the head in 1984 – and the attending brain damage and PTSD (Post Traumatic Stress Disorder) that ensued, living in isolated fashion has been my preference.

Re-entering community life has at times been terrifying. The thing is, each time I’ve climbed over or broken through a “fear wall” I am always glad I did. Now, three years since my arrival in Berkshire County I am more involved in community life than I thought was possible, for me. So much so that I find myself in rehearsals for a play by Samuel D. Hunter called “A Bright New Boise” produced by Mill City Productions.

Returning to the stage for me has, in more ways than I ever imagined, brought a large part of me back to life. I danced with the Joffrey Ballet years ago and was a member of the Quena Acting Company, an offshoot of Joseph Chaikin’s, The Open Theatre. By returning to the stage I’ve reclaimed a cherished part of life. Last night as we arrived for rehearsal the house lights were down and the stage lights were lit, the set well on its way to completion. There’s magic in them there lights.

When I got home last night I danced around the house with Charley, my black-lab mix, doing a rather admirable job of following suit. He’s a goofball too. Once a goofball always a goofball.

I’d have it no other way.