If cruelty were a crime, Donald Trump should be serving life.

I cannot begin to describe the boiling rage I felt when I heard Donald Trump insult Senator John McCain and all veterans and all POWs by saying, “I like people who weren’t captured,” clearly and knowingly implying that being taken prisoner in war is a failing of some kind.

Given the brutality of his comment, one wonders if Trump is a sociopath, absent all empathy for others, . The history of POWs is saturated with stories of experiences so beyond the reach of words horrifying, hell itself might have been an improvement. Will Trump apologize? No, of course not, because he is a sick, nasty, wimp of a man.

To give you an glimpse of what POWs have been through, this picture was taken of two American POWs during the Bataan Death March. 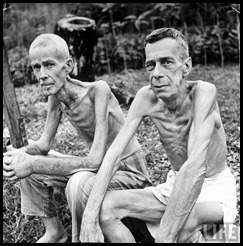 POWs, failures?  Not in my world. In my world they are role models, symbols of hope, reminders of what we as people can endure. Donald Trump…well, back in the day we’d say he needs a good ass whoopin. Hell, he needs an ass whoopin right now.

Iowa Congressman Steve King has reassured all Americans that the poisonous chords of racism, bigotry, fear mongering and hatred are alive and well.

In a despicable and disgusting display of anti-American vitriol, King appeared on an Iowa radio station and told the audience that terrorists would be dancing in the streets if Senator Barack Obama were elected president. In fact, the despicable anti-American spirit, Steve King said, “”And I will tell you that, if he is elected president, then the, the radical Islamists, the, the al–Qaeda, and the radical Islamists and their supporters, will be dancing in the streets in greater numbers than they did on September 11….”

Congressman King went on to say, “”I’ll just say this that when you think about the optics of a Barack Obama potentially getting elected President of the United States — and I mean, what does this look like to the rest of the world?” Congressman King certainly seems to be talking about Obama’s skin color in a way that would make any racist beam with pride.

Steve King happens to be a Republican, but this writer would like to think that all Americans, regardless of party, would quickly condemn his disgusting and destructive display of anti-American sentiments.

I am heartbroken and appalled at Senator John McCain’s acceptance of support from John Hagee, a minister who links the Catholic Church to Adolf Hitler and Nazi Germany and a man who believes New Orleans had it coming to them when Hurricane Katrina inflicted an ineffable amount of carnage and death on that city.

While McCain is a man whose courage I deeply admire, my respect for his moral judgment has fractured. I had thought that if the presidential race comes down to a race between senators McCain and Obama along with Ralph Nader, my country, for the first time in a long time, will have three candidates of real principle to choose from. I do not think so anymore.

Mr. Hagee is the President and CEO of John Hagee Ministries based in San Antonio, Texas. When it came to the New Orleans tragedy he said , “I believe that New Orleans had a level of sin that was offensive to God and they were recipients of the judgment of God for that.”

In his book, Jerusalem Countdown, Hagee wrote this about the Catholic Church: “Adolf Hitler attended a Catholic school as a child and heard all the fiery anti-Semitic rantings from Chrysostom to Martin Luther. When Hitler became a global demonic monster, the Catholic Church and Pope Pius XII never, ever slightly criticized him. Pope Pius XII, called by historians ‘Hitler’s Pope,’ joined Hitler in the infamous Concordat of Collaboration, which turned the youth of Germany over to Nazism, and the churches became the stage background for the bloodthirsty cry, ‘Pereat Judea’…. In all of his [Hitler’s] years of absolute brutality, he was never denounced or even scolded by Pope Pius XII or any Catholic leader in the world. To those Christians who believe that Jewish hearts will be warmed by the sight of the cross, please be informed—to them it’s an electric chair.”

On top of all this Hagee is hellbent on attacking Iran. Why did John McCain accept his support? I can think of no answer to this question that does not scare me, and ought to scare every American.