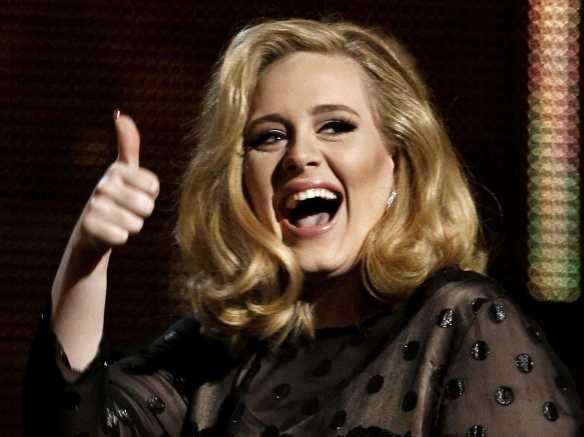 Recently I asked a friend of mine if I was, in fact,  the last person in the United States to have heard about the remarkable singer and person named Adele. His answer, one he offered after he finally stopped laughing, was short and to the point.

If, my dear reader, you are one of my ill-informed brethren, the Adele of which I speak is Adele Laurie Blue Adkins, born May 5, 1988, in Tottenham, anarea in  London, England. She’s 27.

Her first album, “19” was a smash hit. So was her second, “21.” As I write these words, her third album, “25,” is  the biggest selling album in the United States. It is my understanding it was released this November in the states and has now sold about six million copies, in the states.

And it is no wonder. This woman is rich with soul and spirit, and, in her songs, most of which she writes herself, possessed with what I would call an emotional and spiritual fearlessness.

With a voice ranging from center-of-the-soul deep to battle-cry powerful to silk-sweet gentle and more, I am hard pressed to find a place in the emotional and spiritual spectrum that she doesn’t – or can’t – reach.

It occurred to me that her lyrics may not get the credit for emotional honesty they deserve. In a time when honesty, of any kind, frankly, is in short supply on nearly every front, Adele’s lyrics are refreshing and,in some instances, deliciously creative. In “Chasing pavements,” a song she wrote with Eg White, a British musician, songwriter and producer, she sings:

“Should I give up? / Or should I just keep chasin’ pavements / Even if it leads nowhere?”

Then too, anyone on the planet who has had their heart pulverized when a relationship ends knows what she means when, in, “Someone like you,” a song she wrote with musician, songwriter and producer, Dan Wilson, she sings:

But there is more to this woman that I genuinely love. Her compassion for others, her kindness is readily evident. When she appeared on NBC’s Today Show and saw the hundreds of people packing the streets outside she told them she wished she could come out and hug all of them — and she meant it.

When, for the BBC, she put on a disguise and joined others answering a call for what they believed was for Adele impersonators, her kindness and love for her, well, fellow contestants, once their jaw dropped and they realized who she really was, moved me to tears. Moved Adele and a number of the contestants to tears as well, I might add.

There is something truly joyous watching people’s dreams come true.

What I hope with all my might for Adele is this. That her dreams continue to come true. The she stays surrounded by people who care about her and love her because she is the person she is, not because she is, what the media calls a star. There is a part of me the feels protective of her. She is gloriously unfiltered in the way she interacts with the world around her, and one hopes those around her protect her from the predatory pigs that like to feed of the famous and wealthy.

Now, one of the things I like about her is she had no problem at all dropping the F-bomb. I happen to be quite fond of the F-bomb and believe it to be a very effective word and enjoy it immensely. I enjoy it most when it is being used to punctuate a moment, or for comedic effect.

I think using it to wound, to back someone off, needs to be done sparingly. However, if anyone ever treats Adele as if she is nothing more than a star and not the genuinely loving and giving person she is, then I would urge her to open the bomb bay doors, and let the F-bombs fly.

3 thoughts on “Love for Adele”